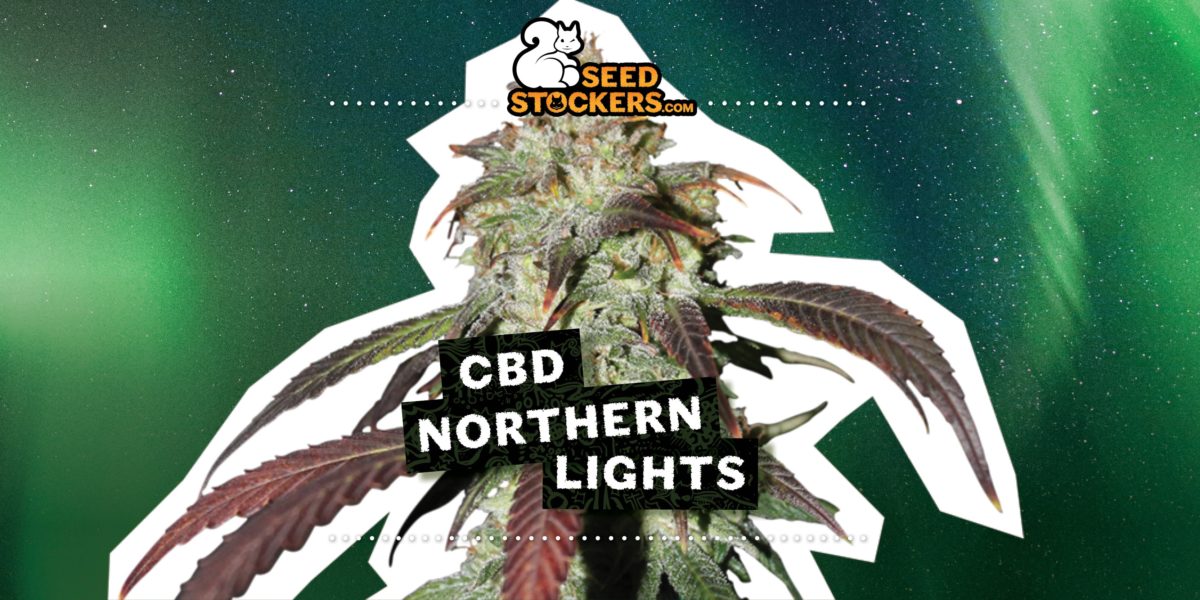 In only a few years, cannabidiol (CBD) has become one of the most known compounds – and most abundant – in the entirety of the new cannabis industry, and become the fashionable cannabinoid.

Its scientific interest has revealed that it not only contains medicinal properties on its own, but it can also be very useful to mitigate the adverse effects of THC itself, obtaining a more sustainable marijuana and an alternative for consumers who prefer a more relaxed effect.

If you are interested in getting large amounts of CBD in your crop in the simplest way, here we hand you a winning bet. 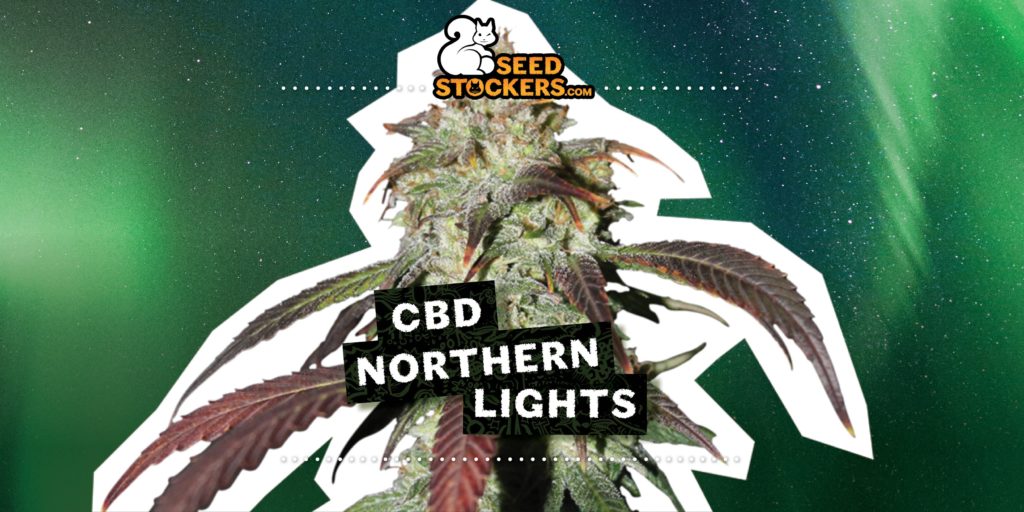 What is CBD Northern Lights?

Cannabis seed banks already offer many varieties rich in CBD but it would be difficult to find a more balanced option than CBD Northern Lights from Seed Stockers; a genetic high in CBD but below 0,5% THC which can be easily outdoor, indoor, or in a greenhouse.

Born from crossing a CBD CRITICAL XXL with a famous variety of Northern Lights – one of the most sought after genetics by indica connoisseurs – CBD Northern Lights quickly flowers in 8 weeks, with incredibly sweet and earthy tastes and aromas. It exhibits diesel or fuel undertones, and is a strong and resistant genetic. It has a compact structure and very wide fan leaves. 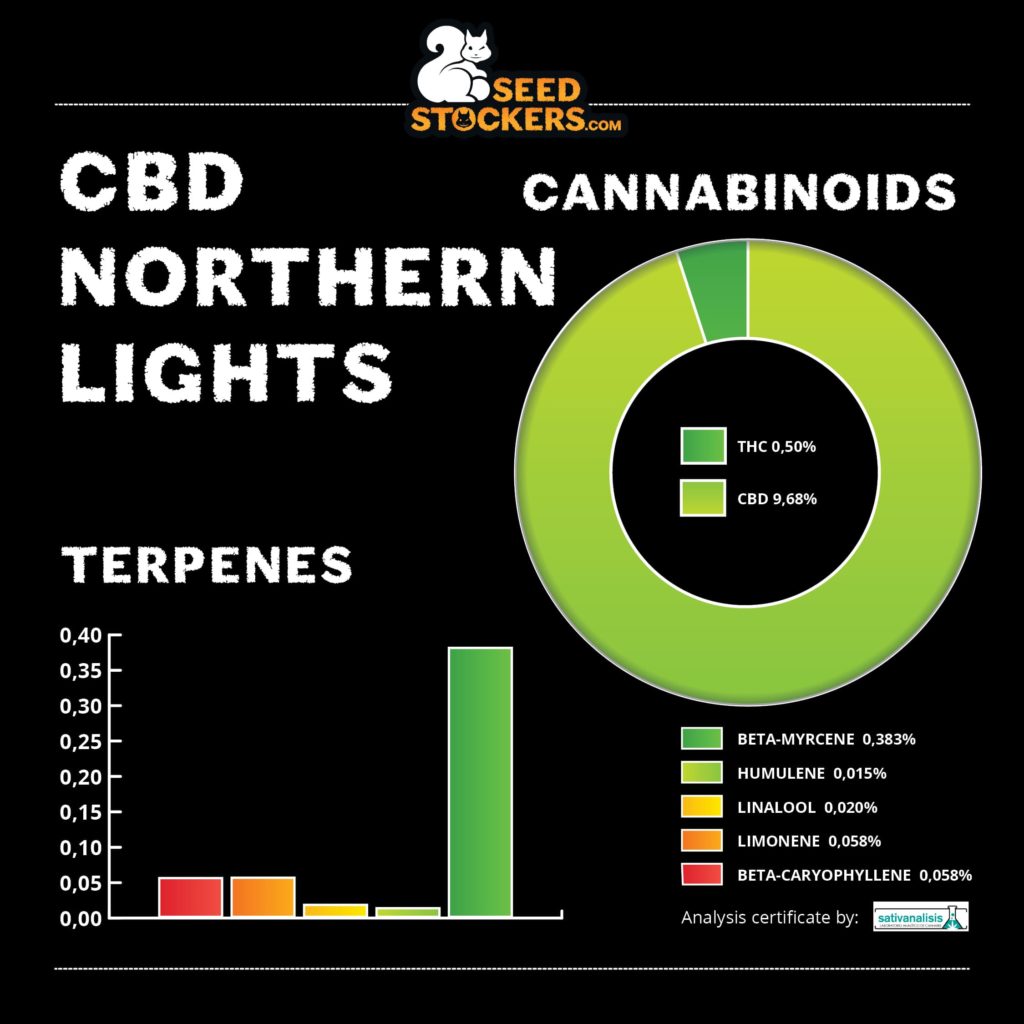 Above all else, CBD Northern Lights is a genetic that comes packed with CBD, the cannabinoid that is serves as the epicentre of medicinal cannabis legalization world wide.

What is CBD used for?

CBD is the most abundantly found non psychoactive cannabinoid found in cannabis and is being investigated for its therapeutic potential. It could be used for treatments for epilepsy or inflammation, physical ailments or common neuro-psychiatric issues.

CBD affects our bodies by binding to receptors found on the surface of cells. These receptors act as “access locks” to cells; and when they are activated by compounds that fit these locks, they tell the cell what to do or not to do.

In the case of the human endocannabinoid system, the most important are the CB1 and type 2 (CB2) receptors. Unlike THC, which interacts more extensively with these two receptors, CBD has little binding affinity for them.

Instead, it appears to modulate several non-cannabinoid receptors, such as serotonin receptors, which are known to influence pain, mood, and sleep; or TRP receptors, cellular sensors that detect changes in the environment. It even works through several channels independent of the receiver.

This seems to be why it is such a versatile compound, and many people might find benefit from it.

How do obtain CBD from CBDA?

CBD is produced by the conversion of its acidic version, CBDA, which is developed from “the mother of all cannabinoids”, the cannabigerolic acid (CBGA) present in the living plant.

Once CBDA has been synthesized by the plant, it is converted to CBD by thermal decarboxylation. This process can occur instantly, such as when cannabis is smoked or vaporized, or by slow degradation over time if plant material is allowed to sit at room temperature.

Often, CBDA and the other acidic forms of cannabinoids are not considered pharmacologically active. This is because they do not affect the endocannabinoid system in the same way that their decarboxylated forms do.

New research is beginning to challenge this idea, pointing to CBDA and other acidic forms of cannabinoids’ potential to act as an anti-inflammatory agents or as a powerful treatments for nausea and anxiety. 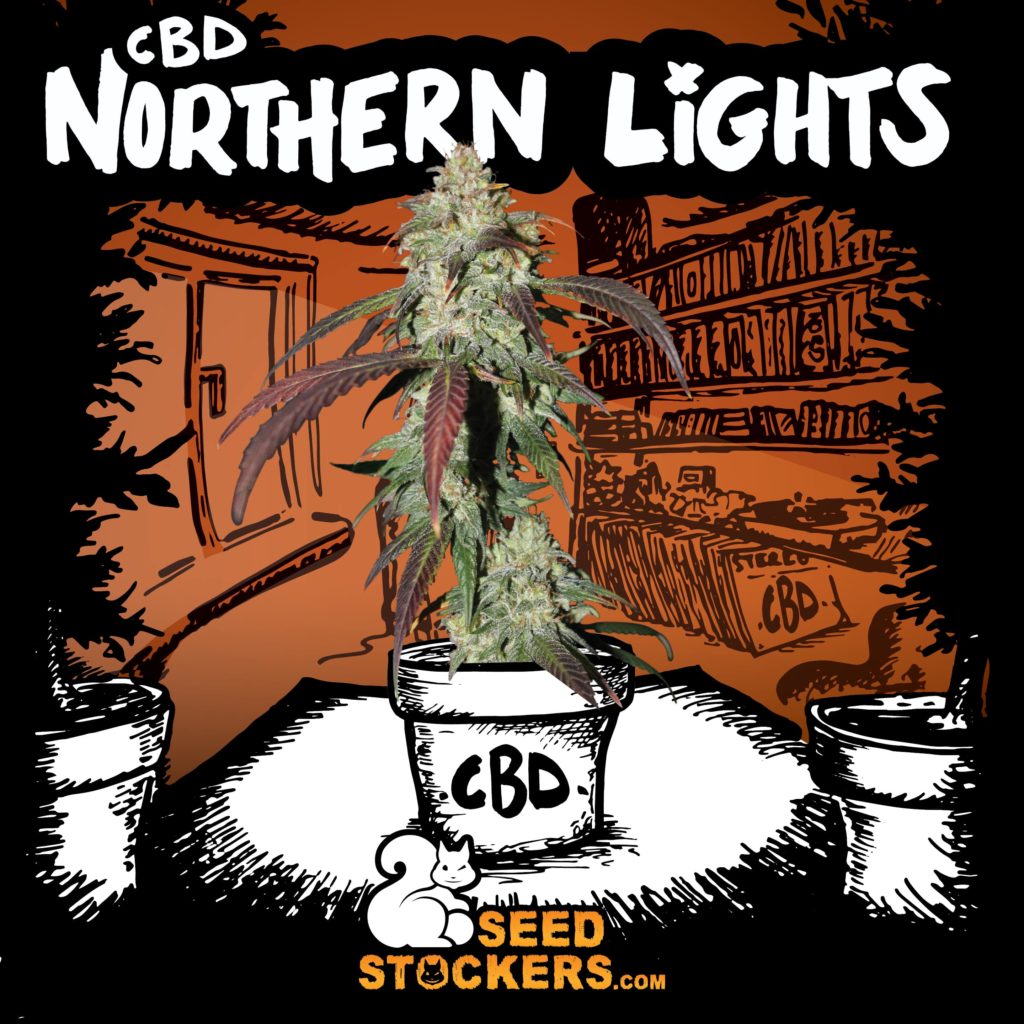 Despite being abundant in raw cannabis, consumers are not often exposed to much CBDA as it is converted to CBD by most consumption methods. CBD continues to grow in popularity for the potential benefits it offers.

In fact, CBD is being investigated for use as:

We often obtain better results from different of cannabinoids and flavour compounds like terpenes and terpenoids when they are used in conjunction than used separately or individually. This is what is commonly referred to as the “Entourage effect.” The synergistic activity most investigated between the cannabinoids occurs between the two most commonly known – CBD and THC.

What seems to be more important for recreational consumers is the calming effect that CBD seems to have, mitigating the psychedelic effect of THC. It has the ability to counteract some of the undesired effects of THC such as anxiety, dry mouth, or perception alteration. Paradoxically, even thought CBD has opposite effects of THC, it can also increase some of its effects at the same time – prolonging its duration of benefit, and limiting its degradation in the liver.

CBD get you high?

The modulating effect of marijuana with high levels of CBD produces a milder, relaxing, less psychoactive and more sustainable sensation, although at the same time, it is longer in time. For this reason, varieties rich in CBD with 1: 1 or 1: 2 ratios (THC / CBD) produce a more moderate effect than those genetics with high levels of THC with little CBD.

Because we hardly have any clinical evidence for CBD, we also lack evidence against CBD. Of the few human trials that have been conducted, no conclusive serious side effects have emerged. So the World Health Organization (WHO) determined in late 2017 that cannabidiol is not a dangerous substance and that it has great value for medicine. The WHO also endorsed that cannabidiol does not cause addiction based on multiple studies.

It is important to take into account the bi-phasic character of CBD. This compound in different amounts can produce opposite effects, including nausea, fatigue and irritability, diarrea, and changes in appetite and / or weight.

CBD can also increase the blood level of the anticoagulant warfarin. That is why, especially if we are talking about using it to treat a disease, correct dosing is incredibly important – and even more important is discussing any treatment plan involving CBD with your physician. 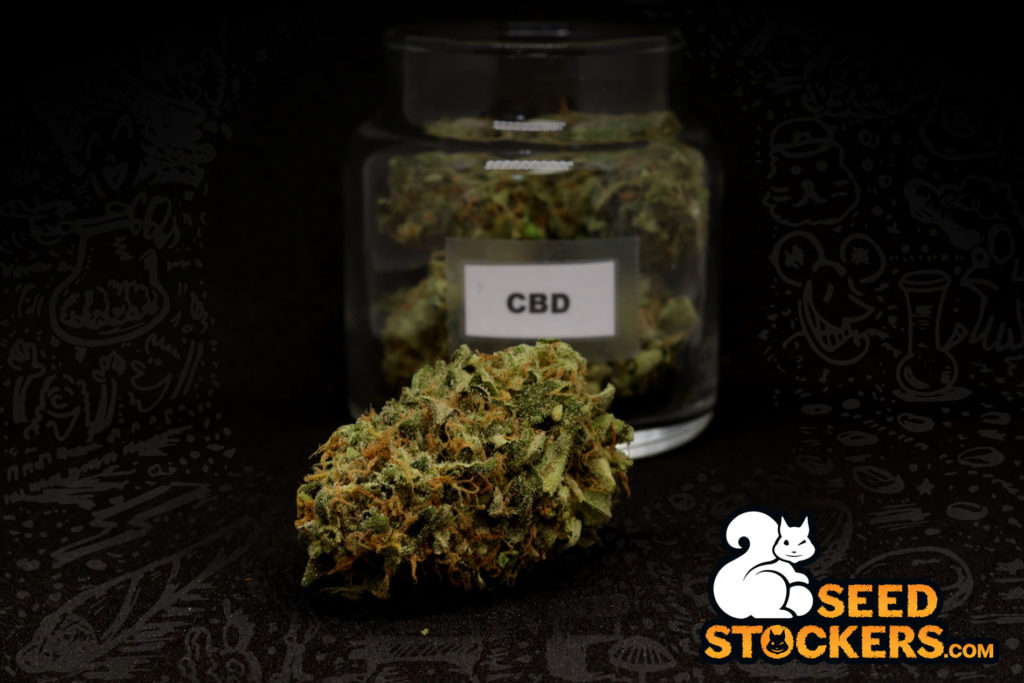 CBD is used for many medical purposes.

Unfortunately, the answer is neither simple nor straightforward. The legal status of CBD in Europe is defined by national and EU regulations. But legislation and people’s opinions are continually changing, so the “rules” that apply today may not be effective tomorrow.

In fact, last year the European Commission’s preliminary opinion on CBD as a narcotic was withdrawn after a few months. The Commission changed its mind in November 2020 when the European Court of Justice issued a ruling declaring that CBD extracted from cannabis should not be considered a drug.

In all EU and UK members, CBD cosmetic products are legal if they comply with applicable cosmetic regulations. On the other hand, CBD food supplements are a bit more complex. And the dried flowers quickly enter the terrain of uncertainty.

In conclusion it seems whether a CBD product can be legally sold in a certain country depends on many factors, such as the classification of the final product, the source of the CBD and, last but not least, the specific regulations from that country. 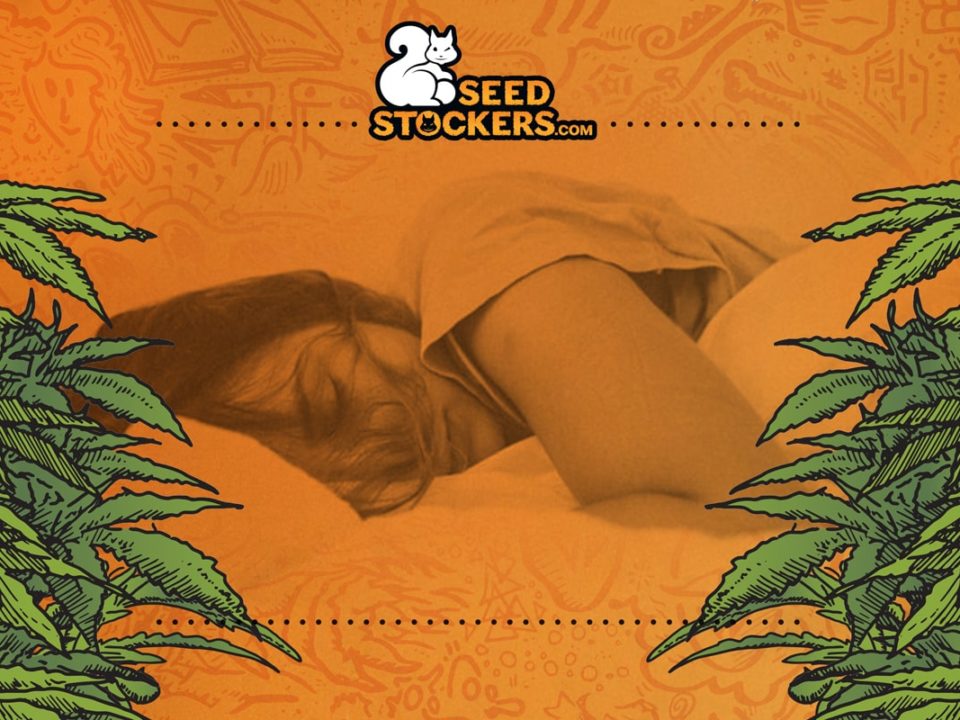 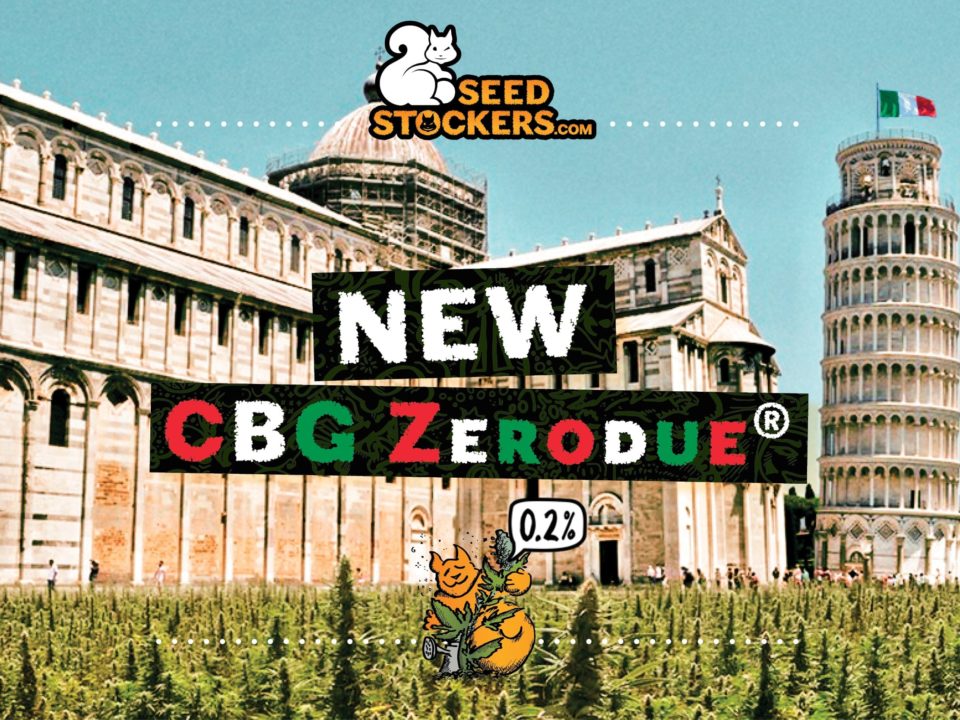 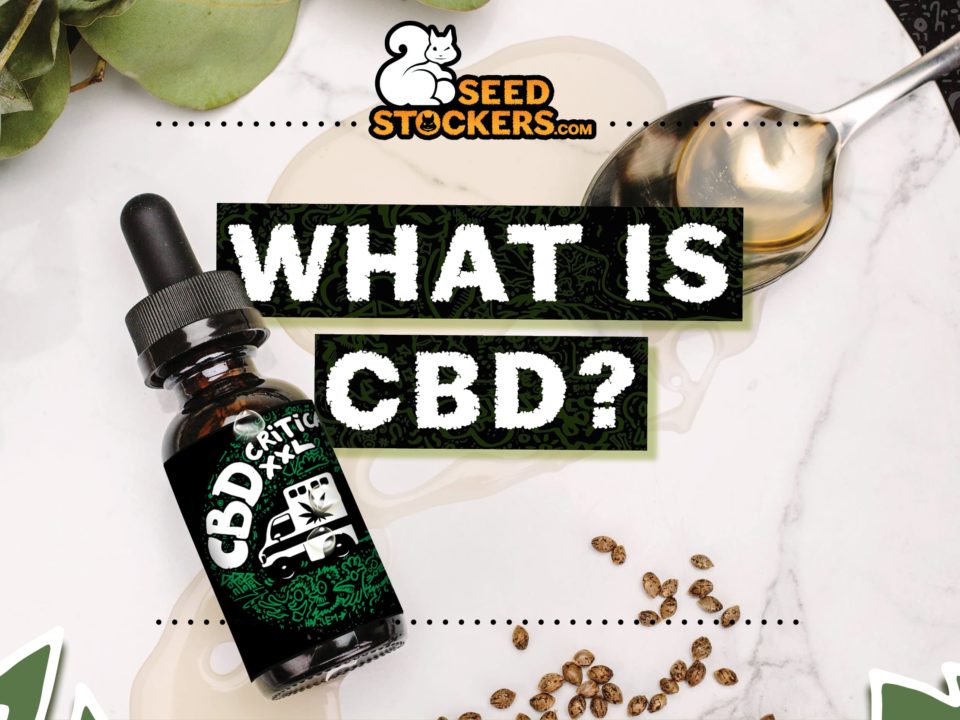