test ▷When to Harvest Cannabis | Weedstockers

Have you been able to germinate your Seedstockers seeds yet? How's it growing? 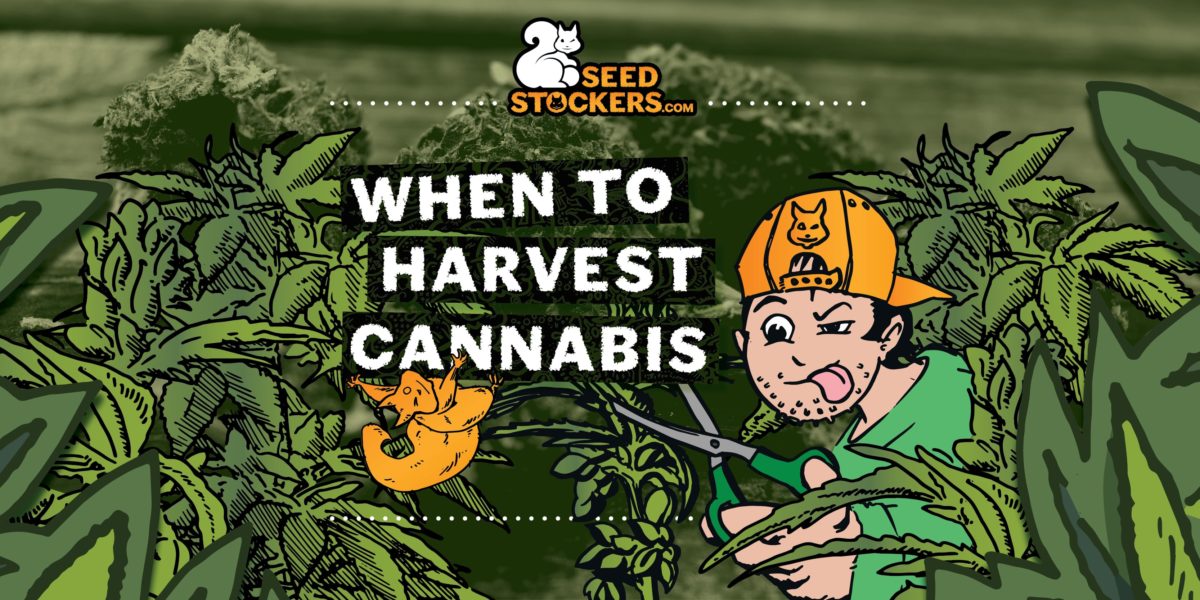 It’s fundamental for a grower to understand and know the best moment in which they should harvest their cannabis. If the plants are cut down too soon, the glandular material will contain far fewer of the components which contribute to flavours, aromas, and cannabinoid potency.

On the other hand, if the plants are cut down too late, at least some of the THC may have converted to CBN – giving a more sedative and narcotic effect.

As you can see, it is important to understand what is happening on both a physical and a chemical level inside cannabis plants. 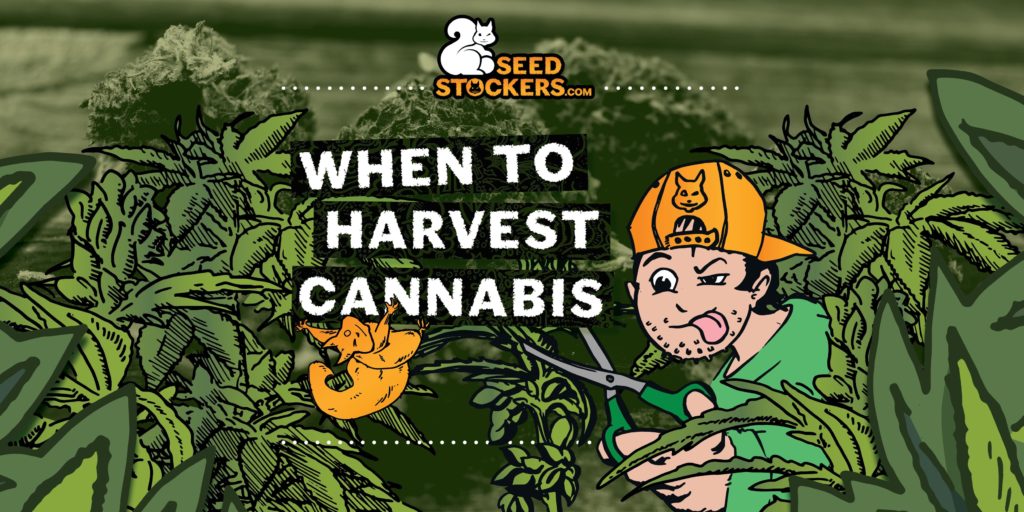 When to harvest cannabis

There are multiple factors that should be kept in mind even though each one varies in just how precise it is:

The recommended flowering time for that seed

In fact, this is the least precise method of determining when to harvest the cannabis plant. The information should in reality be used only to determine a window of time in which the plant should be harvest, and not as a definitive point of maturation.

The color of the hairs or pistils

A more precise factor is through observation of the pistils and by tracking their color change during maturation. During the flowering period, the white pistils will grow longer and become denser. Around the time of harvest, these hairs will be primarily orange or brown.

The swelling of the Calyx

The swelling of the calyx is another good indicator that the flower is at the peak of maturity. In the sixth week of flowering, the calyces begin to swell. Often growers are impatient and harvest before the calyxes have grown fat and dense enough. At maximum maturity, about 90% of the calyces will have fattened.

The color of the trichomes

The very best indicators of maturity are the trichomes, the small glands of resin that contain terpenes and cannabinoids, which also change color depending on their level of maturity. It’s important to observe them in order to have an idea of the grade of potency, effect, and terpene profile that the plant is developing.

How do you know when to harvest cannabis?

In order to answer this question, it’s first important to understand the transformation of THC that is produced inside of the trichomes.

As soon as a plant is cut, it begins to die, and the biosynthesis of cannabinoids is interrupted. In this process our intention is to preserve the cannabinoids during drying and curing, so that they are in the same form they were at the moment they were harvested.

THC is not created by the plant, but is instead a byproduct of its degradation. THC exists as THCa on fresh or well preserved flowers, until it is transformed into THC either by fire when lighting a joint, or slowly through aging as it interacts with oxygen – even at room temperature. Prolonged exposure to light – from the sun or from lights in a store – causes THCa to skip the conversion to THC entirely and become CBNa.

While THC is known for its euphoric and cerebral effect, cannabinol (CBN) demonstrates physically sedative properties with a great therapeutic potential as a sleep aide.

For this reason, looking at the color of the trichome can give an idea of when to harvest the plant since the coloration is directly correlated to the stage of cannabinoid synthesis:

Many growers will wait until about 10 – 20 % of the trichomes are amber, while the remaining are cloudy and clear trichomes are virtually non existent. This ensures the maximum possible content of the cannabinoids we are looking for, preventing the presences of precursor cannabinoids or cannabinoids produced by degradation and over-maturation.

Some growers may be interested in obtaining high amounts of CBNa, for an effect that is much more sedative and narcotic while less psychedelic. In this case, the grower will wait until a greater percentage of the trichomes have turned amber.

When to harvest cannabis grown outside

The specific part of the world, and therefore its climate, in which you intend to grow cannabis will often be as big of a factor for deciding when to harvest as the color of trichomes or pistils. For this reason, too, different varieties of cannabis grow more favourably in different climates.

Climates with cold autumns will find that they produce less yield but often higher potency flowers. The cold temperatures slow the metabolism of the plant but encourage cannabinoid and flavonoid production. While cannabis can handle temperatures quite low – growers in colder climates might prefer fast flowering or autoflowering genetics in order to obtain a fully mature plant during a short autumn. 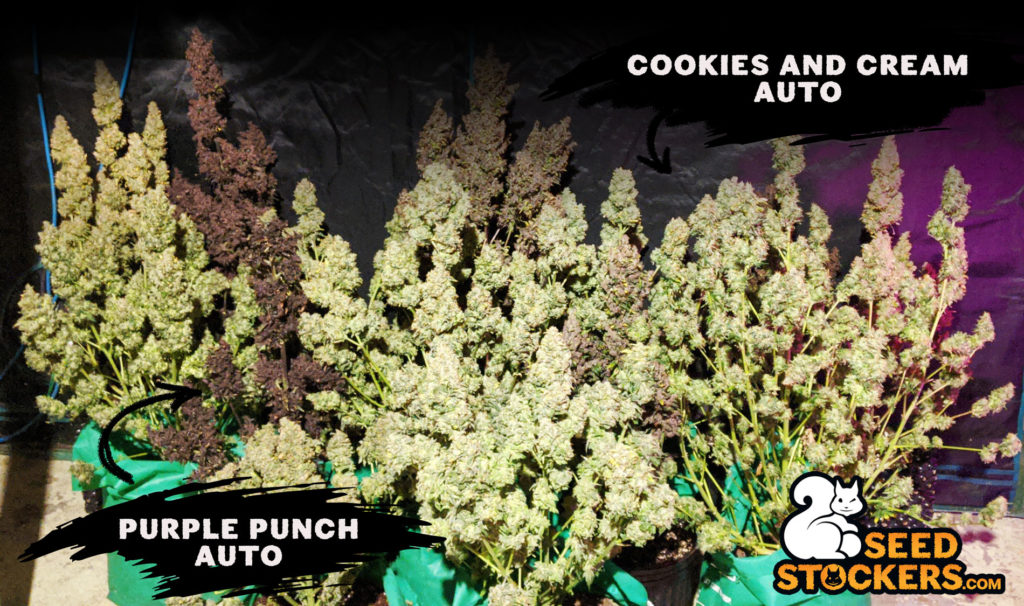 Purple Punch Auto and Cookies and Cream from Seedstockers.

Growers living in climates which are wet and rainy during the fall will also benefit from fast flowering or autoflowering cannabis varieties. Because mould and other problems become a concern in these climates, it can be difficult to successfully mature cannabis varieties requiring longer flowering periods.

Tropical climates often offer the most versatility to a grower and virtually any kind of cannabis plant can be successfully maturated at its own pace.

When to harvest cannabis grown inside

Growing indoors gives the freedom to optimise climate and harvest cannabis whenever its trichomes demonstrate their maturity. Climate and growing techniques during flowering can encourage maturation:

It is a mistake to consider how to push a cannabis plant to flower “faster”. Instead, consider which weak factors in cultivation technique might preventing the plant from maturing as fast as it could.

How to harvest cannabis

Once the best time to harvest cannabis has been determined, the buds must be dried, trimmed, cured and stored to avoid any degradation of the cannabinoids and to achieve a smooth, flavourful (and yes, more potent) smoke that is characteristic of well produced cannabis.

During the process of drying, the plant is still going through internal processes which break down different compounds like chlorophyll, the presence of which diminish the quality of the herb. If the flowers are dried too quickly, or plants are trimmed wet, many of these compounds become locked into the flower and will take away from the awesomeness of the final product. Drying too quickly will also result in a loss of desired flavonoid compounds.

While many cultivators are used to trimming cannabis wet for a variety of reasons, the best cannabis flower is carefully trimmed after drying. This allows for better chlorophyll breakdown and greenhouse gas evacuation, and when trimmed with care, will ultimately lead to higher potency and more flavourful cannabis.

How to dry Cannabis

Harvested cannabis plants should be hung upside down in a dark room – remember that light converts THCa into CBNa – with fans offering copious amounts of air movement. Any leaf which can be removed by the base of its stem, without touching any of the flower, should be removed at this time. These leaves are commonly called fan leaves, or sun leaves. 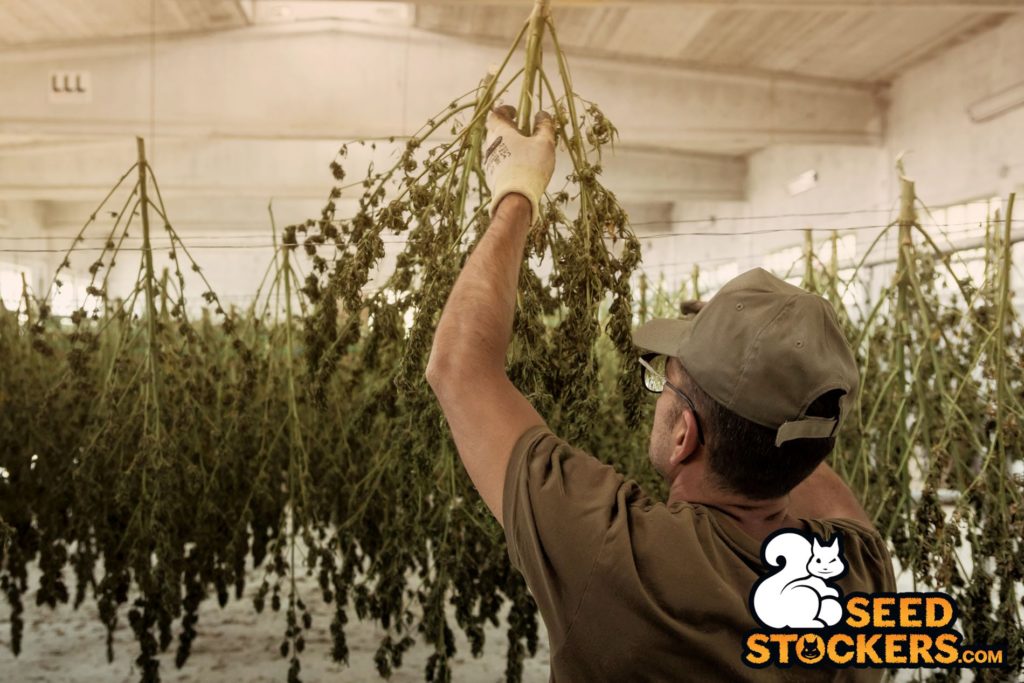 Cannabis must be dried as slowly as possible without allowing for the formation of moulds or bacteria. The process should last from 7 to 20 days, keeping the humidity around 60% and the temperature as close as possible to 15ºC.

How to Trim Cannabis

Once the flowers on the branches feel crisp to the touch, wait another day. There is still quite a bit of moisture that is present on the inside of the flowers and in the stems. Breakdown the plant, in a way that leaves a length of stem leading up to each individual flower bud. With a pair of special scissors (Fiskars are recommended) hold the but by its lollipop of a stem, and begin to remove leaves from the base where they meet stem. 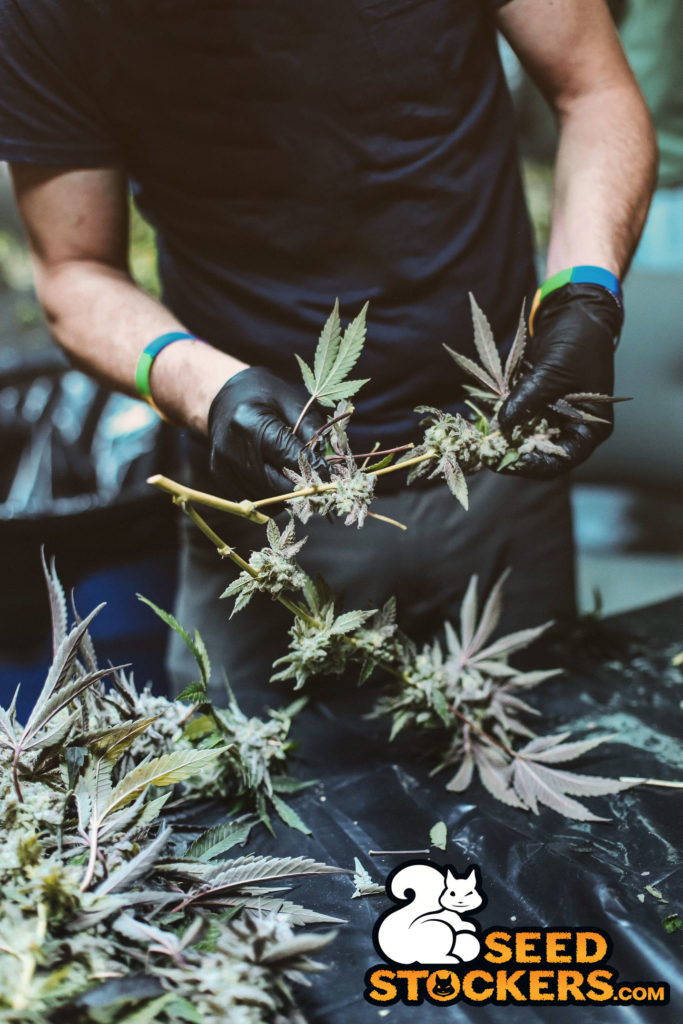 Leaves should pull away and snap off easily without having to use the scissors to cut the leaves. If not, the buds may need a bit more time to dry. Using the scissors as scissors rather than a device for flicking leaves off, can be tedious work but will prevent damaging glandular material like trichomes and will result in the best smoke. Leafs that are buried in the flower should be left alone. These leaves are full of glandular material themselves, and act as a barrier to protect the trichomes on the flower when handled.

After Trimming, the buds will still need to have their moisture levels homogenised within them to finish drying and begin the cure process. Place them in an air tight container over night, and burp the container every 10-12 hours over the next few days, or until relative humidity of about 50-55% is achieved.

Curing is not the same as drying…

Once the cannabis buds have had their humidity levels homogenised and brought down to our desired levels, the container should be closed more permanently. Close the air tight container and leave it for a week at a time, out of light and around 20ºC, before opening it or burping it.

After a couple of weeks, it no longer needs to be burped, and can be left to cure on its own. During this process, plant pigments and compounds continue to break down and flavonoid profiles augment and expand. The best cannabis is often left to cure for months at a time in order to bring out the best in its aromatic bouquet. 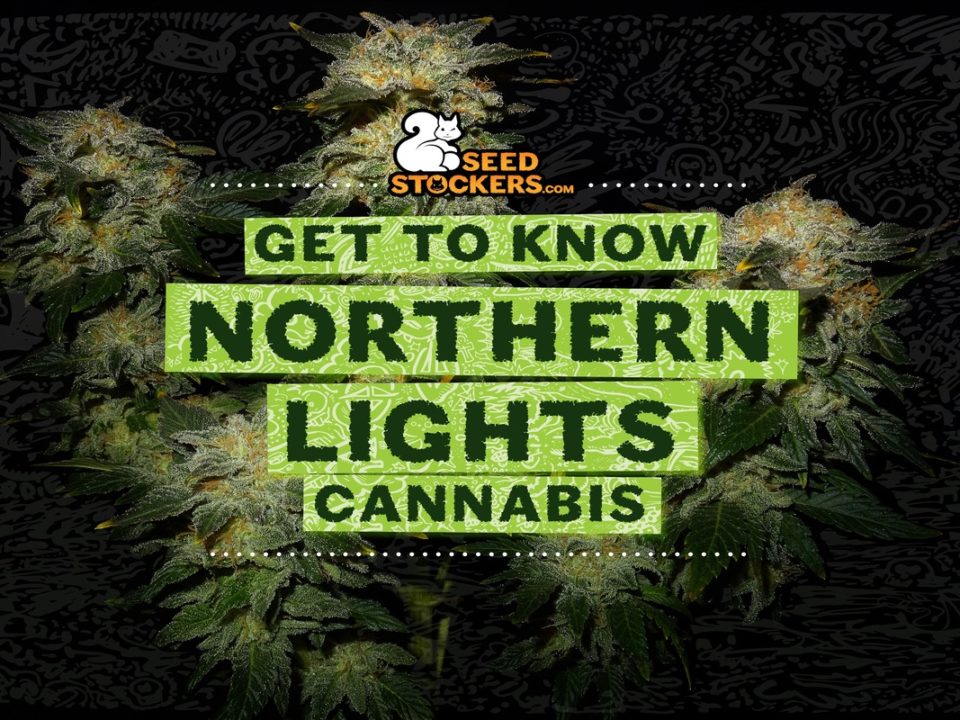 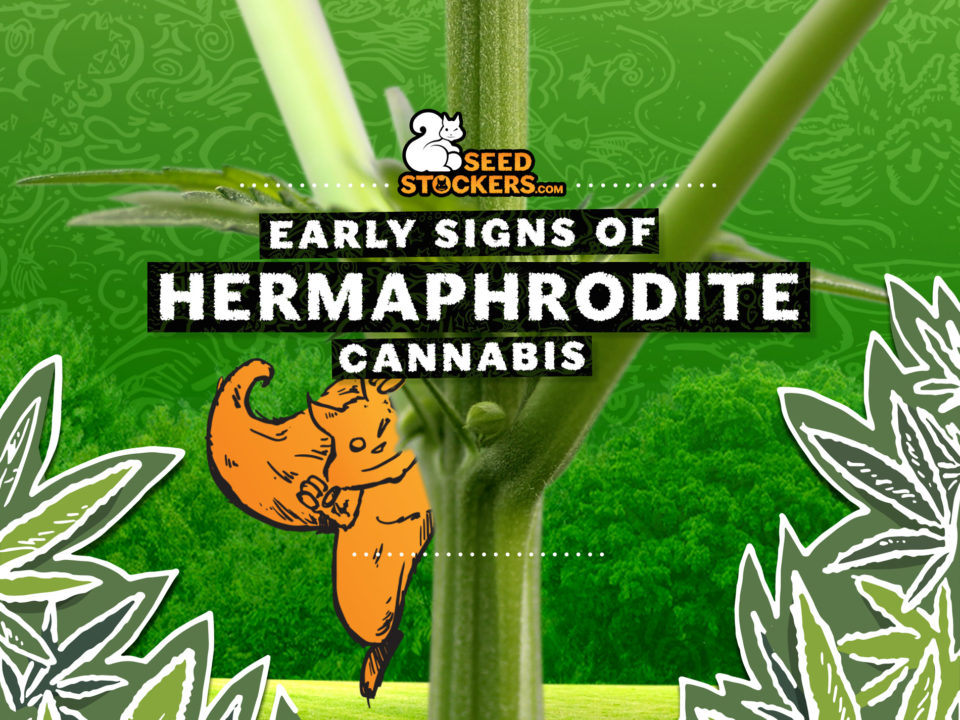