Cannabis plants come as males, females, and in some rare cases hermaphrodites.

When you use cannabis, you will most likely be using the flowers, or resins from a female cannabis plant. This is what produces the most cannabinoids. Male cannabis plants are used for breeding cannabis. The pollen from the male is given to the female, and she grows seeds in her buds.

For most cannabis users, seedy buds are a disaster for most growers, so male plants are often discarded as soon as they show signs of sex. You see, you can’t really tell if a cannabis plant is male or female until it starts to grow flowers. If you have numerous cannabis plants, you need to be able to spot what sex they are as early as possible to prevent pollination of your buds!

How to Induce Flowering in Cannabis Plants

Photoperiodic cannabis plants however, do not flower automatically. They need to be on a certain light cycle for flowers to start growing.

A germinated seed will take about 4 weeks to reach maturity regardless of photopheriod sensitivity, and flowering to discover sex shouldn’t be induced before.

On the other hand non-photoperiodic cannabis, like autoflowering cannabis, simply won’t begin flowering before maturing – again, about 4 weeks after germination. 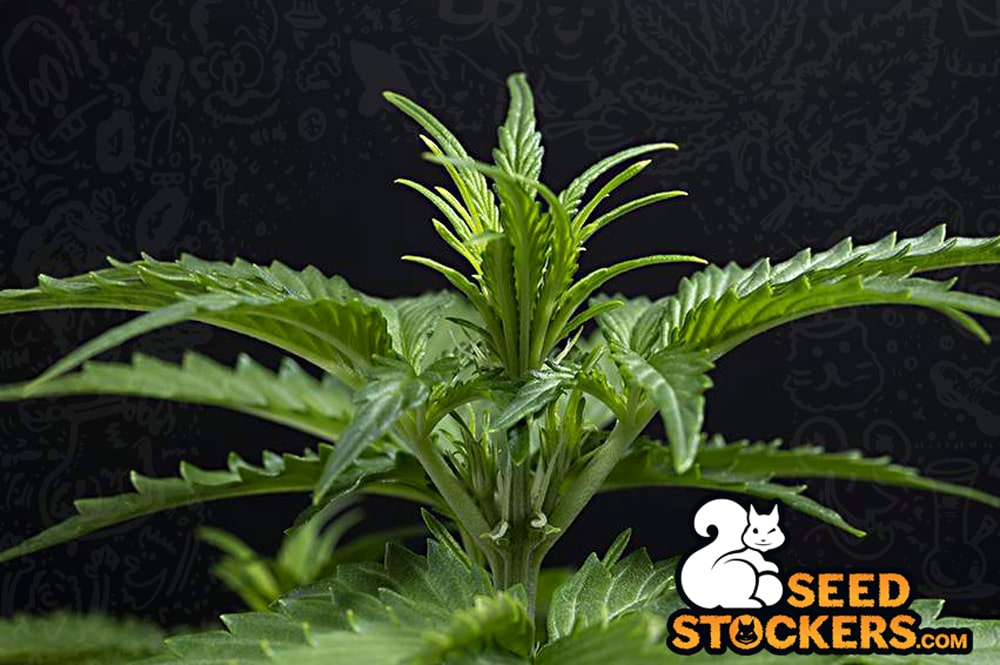 Most cannabis growers will use high quality feminized cannabis seeds. In most cases, these will be 99% female and you will rarely see a male plant.  ”Regular cannabis seeds” may develop as male or female plants depending on a variety of factors like climate and genetics, and flowering must be induced in order to determine sex.

Four or five weeks after germination, your plant will be ready to start flowering. If it is an autoflowering cannabis plant, then you just have to wait and watch the flowers grow. For photoperiod cannabis plants, you will need to change your light cycle to 12 hours of light and 12 hours of darkness a day. For example, lights come on at 7pm, and turn off at 7am every day.

It can take between 5 and 14 days for flowers to start to show on a female cannabis plant. Male cannabis plants will generally show flowers a few days sooner than females. This makes it easier to identify males early and remove them from the grow area.

A male cannabis plant will start to show its flowers around 5 days after flowering is induced. It may be difficult at first to tell for sure if a flower is male or female, but there is no rush to identify it. If you are going to remove plants that are male, you want to make sure they are male first. It can be easy to miss-identify them, and you may kill a perfectly good female. 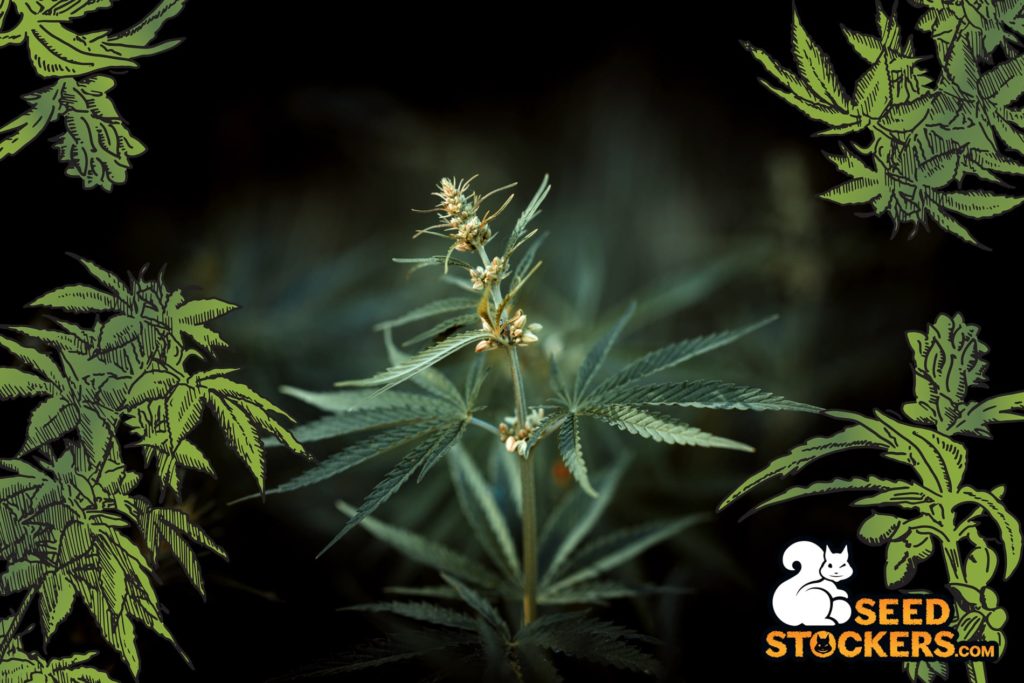 The pollen from a male cannabis plant is not viable until around 10 days after the male flowers have first formed. So there is no rush to chop it down as soon as you see something that may be male.

Male cannabis plant flowers will begin to grow as a small round ball, on the nodes between branches. This can look similar to a female at first, but as it grows it will become round, like a ball, and it will be on a small stalk.

As the male flowers grow, they resemble a bunch of grapes. They will open up like a banana and shed pollen. If it gets this far, it is too late and any female plants in close proximity will have been pollinated. As soon as you see a ball on a stalk, with no white hairs coming out. You know for sure it’s a male plant, and unless you’re planning on making seeds it needs to be removed. 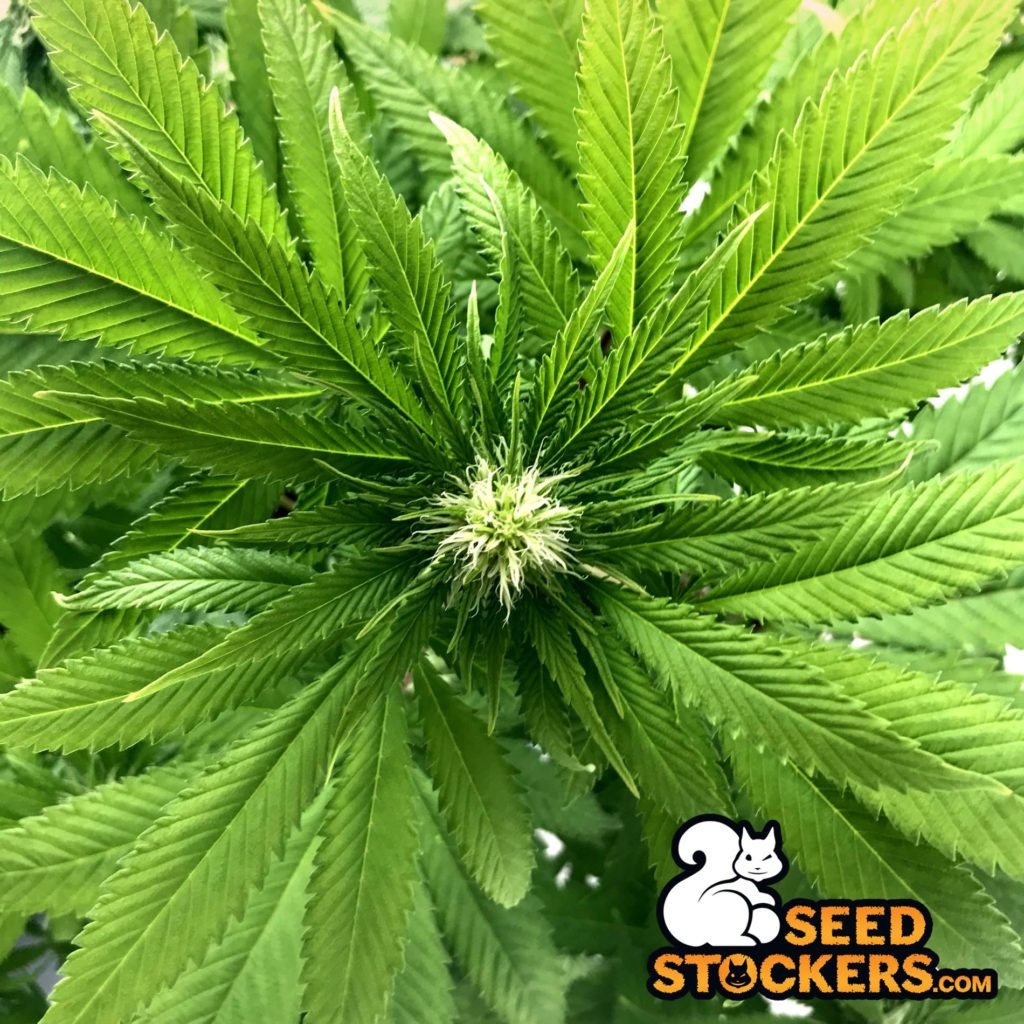 You will see small rain drop shaped ducts growing, and have white hairs called pistils protruding from them. These are called Calyxes, and are a typical sign of a female cannabis plant. The plant will grow many of these collectively, and that is what makes up your buds.

How to Tell if a Cannabis Plant is Male or Female

Once the cannabis plant is flowering, you just have to wait. Check the nodes daily for signs of new growth. If you see a round ball on a stalk with no white hair, then your plant is probably male.

If you see a ball, with a point, that also has white hair coming out of it, then you have a female cannabis plant. As long as you see the white pistils, you’re good to go. But in some cases, a cannabis plant can be both sexes, and will display male and female flowers at the same time. This is known as “hermie” (Hermaphrodite), and should be treated as a male cannabis plant. 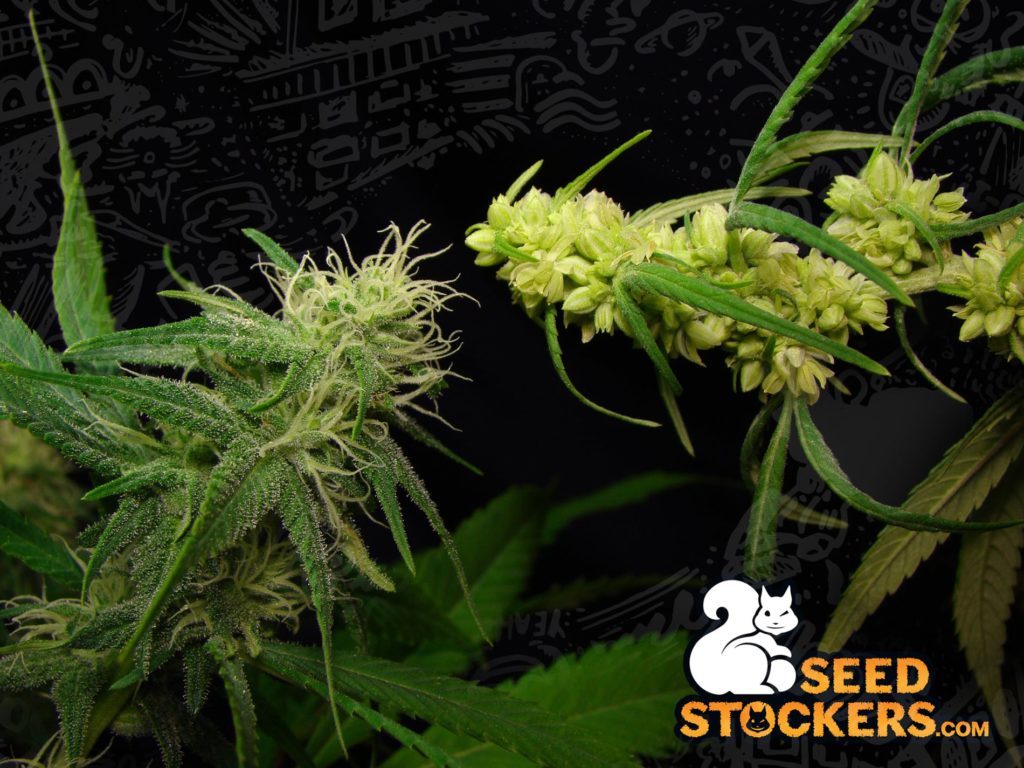 In some cases a cannabis plant will grow male and female flowers. This happens often if you have grown “bag seed” (seed found in weed you bought) or weak genetics. If you see signs of a hermie early on, treat it as a male cannabis plant and remove it from the grow room.

The male flowers on a hermaphrodite cannabis plant will produce pollen and pollinate nearby females, as well as itself. So unless you are looking to breed cannabis, or you don’t mind smoking seedy weed, you need to get rid of the plant. 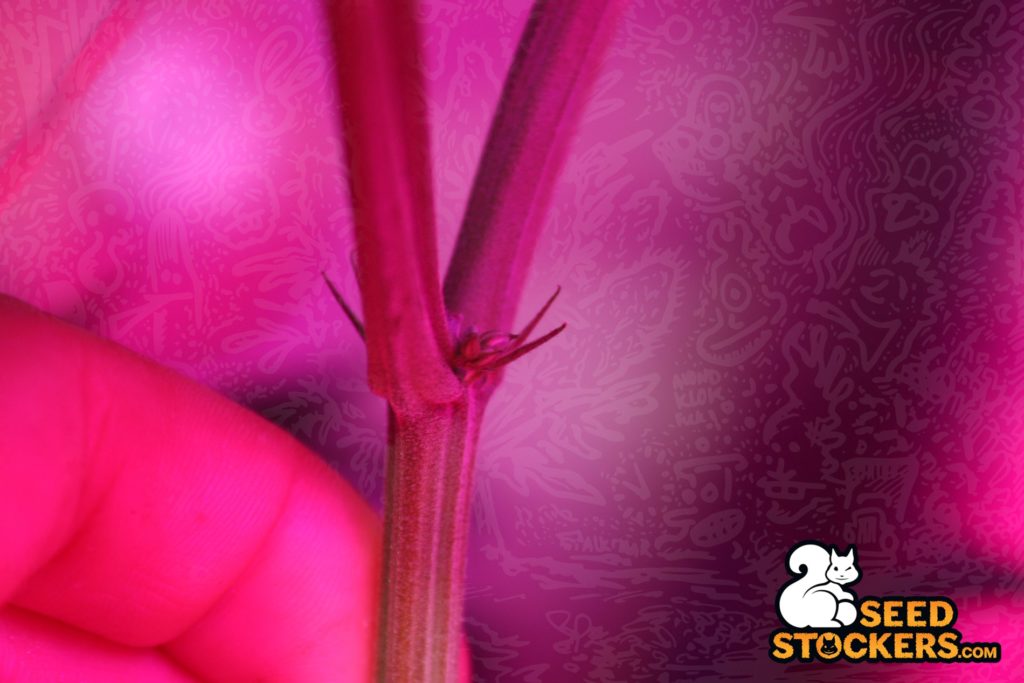 How to Turn a Male Weed Plant into a Female

It is possible to make a male cannabis plant grow female flowers by using Ethylene. This is a female plant hormone, but it is not a solution if you plan to use the buds for anything other than breeding.

Ethylene can be dangerous if inhaled, or if it comes into contact with skin. It can be especially dangerous to pets and animals If a cannabis plant turns out to be male, then you should discard it unless you’re thinking about making cannabis seeds.

The only reason to make a male cannabis plant grow female flowers is to see what female traits it expresses. This is how the world’s best cannabis breeders select males to cross with their female plants, to get the best genetics. If the plant you are growing isn’t female, you should get rid of it and start a new grow.

To prevent a lot of these problems, you can just buy good quality feminised cannabis seeds from Seedstockers. This will ensure the cannabis seeds you grow turn out to be females. None of them will be male. This will save you time, and space, as you don’t need to spend time growing plants that you will eventually throw away. 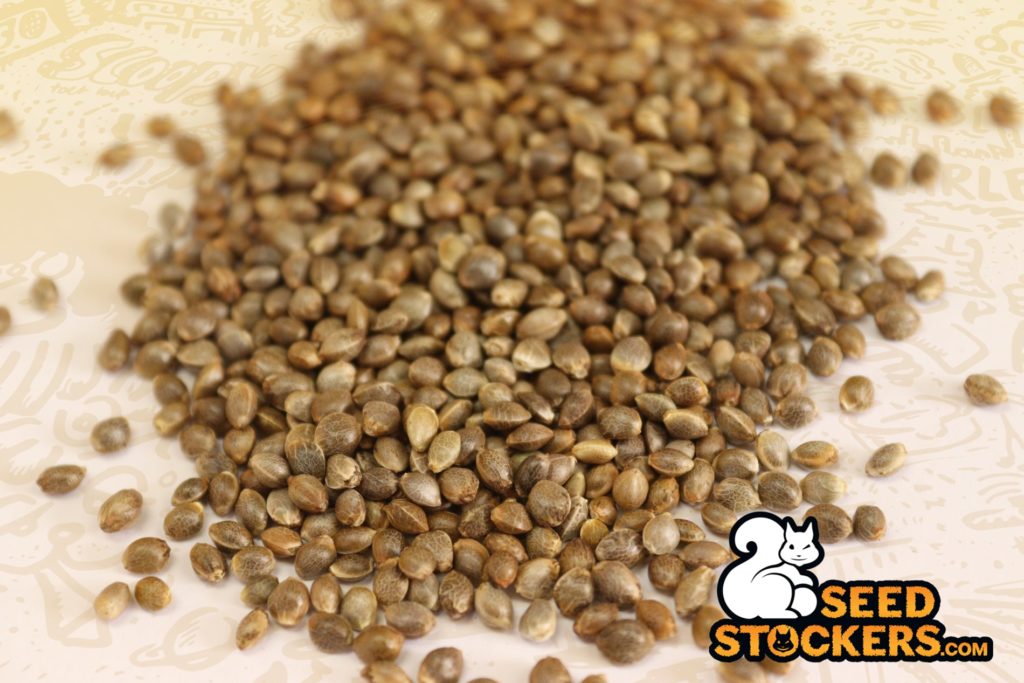 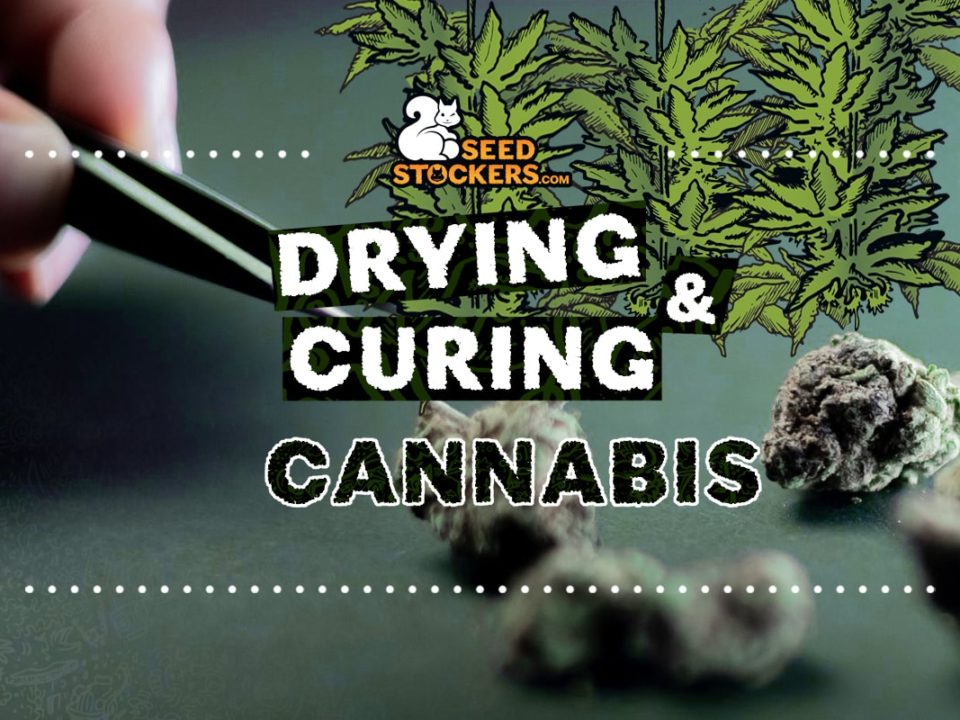 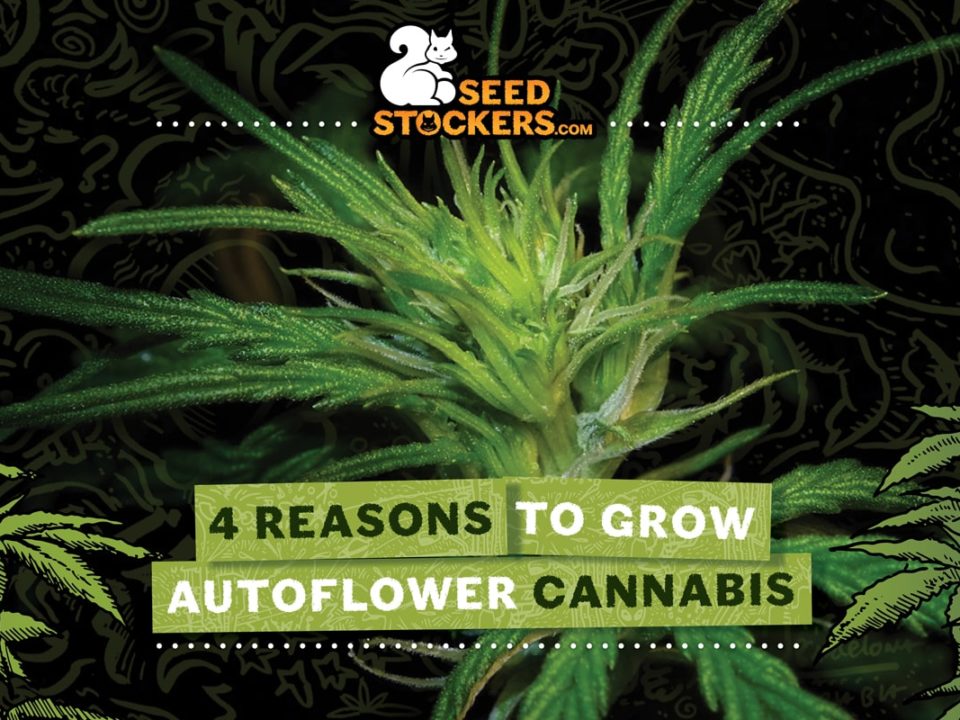 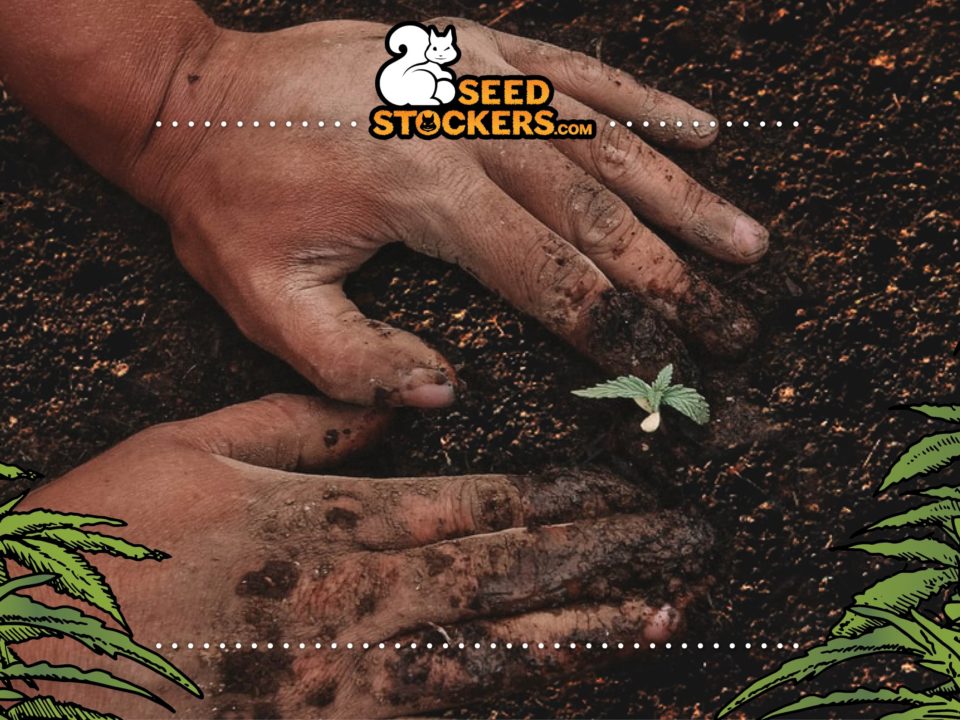